I've found my next vacation spot! 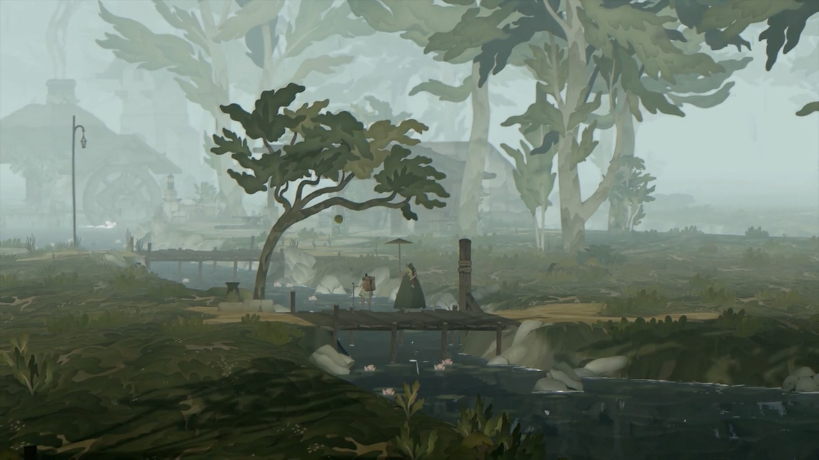 Book of Travels is a beautiful and relaxing MMORPG by Might and Delight, developers of the well-known wildlife survival game, Shelter. The game's stunning hand-painted graphics are unlike anything seen in MMORPGs today, with a fairytale atmosphere that brings to mind Child of Light's watercolor style and a hint of traditional Japanese art.

The game focuses on social interaction and offers a plethora of gentle slice-of-life situations, mysteries to solve, and lore to uncover. Throughout your journey across the Braided Shore, you'll witness various random events, such as overhearing gossip from nearby townsfolk or encountering wildlife; each of these events will help you discover more of the world's stories and secrets. In addition, while combat is not the focus of the game, every battle you face will be thrilling and purposeful.

Game servers will only host a few players each, making every interaction meaningful. You'll communicate with other players using symbols, learning new ones throughout your wanderings, as you occasionally need to cooperate to overcome various obstacles. Thankfully, if you prefer to play solo, there will still be endless wonders for you to experience.

Book of Travels features a deep character creation system, where personality traits and emotional experiences play a large role in your growth. As you progress, you need to build up various physical, magical, and crafting skills to aid in your survival, such as the ability to brew a mystical tea that will protect you against nasty weather. Speaking as a Canadian in the winter months, this is a skill I would greatly appreciate.

While Book of Travels is already funded, plenty of exciting stretch goals are on the way, such as the addition of a pet collecting system. Although several of my favorite preview clips already feature an adorable Shiba-like dog following the player character, I look forward to seeing what other animals may be in store. Hopefully even more dogs! Finally, many of the pledge levels will reward you with a digital sketchbook and a digital lore compendium; must-have items for fans of the game's lush artwork.