An opera director solving bloody murders, and, well, the complete opposite vibe are on display this week.

The stage is set; the lights dim. A chill breeze blows through the theatre from a broken window; if you take a closer look, you can see bloodstains on the shards below. Ominous violin music starts to play as the curtains rise, revealing...a tiny rabbit with a sweet smile and a bouquet of pink and yellow flowers. Hmm, I think there's been a bit of a mixup here.

*grabs a megaphone* Would a staff member gently return that rabbit to its own game? Thank you!

We will now continue with your regularly scheduled program... 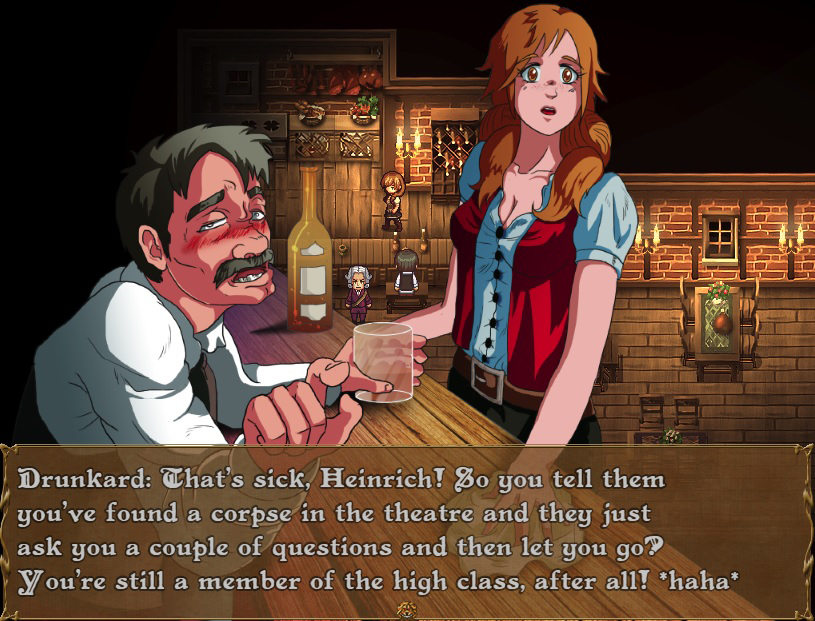 18th-century Austria. There is a scream, and the sound of a cello. A figure appears, horribly tortured and reconstructed into shape of the instrument. Who could be responsible for this gruesome scene? You'll find out in Blood Opera Crescendo, an investigative RPG themed around classical music.

Inspired by the 1996 adventure game Opera Fatal and the Ace Attorney series, Blood Opera Crescendo puts you in the role of a former opera director who has fallen from grace and takes it upon himself to solve a series of grotesque murders terrifying the citizens of Bleichburg.

Although the game is being made with RPG Maker MV, don't let that deter you; the setting, gameplay, and themes deviate quite a bit from the typical fare. The core gameplay centers around visual novel-style investigation and interrogation scenes featuring multiple choice questions. You'll need to be careful during these bits, as the cops don't necessarily appreciate the fact that you're trying to solve the cases on your own. Choose the wrong dialogue option and you could be arrested, leading to a Game Over!

Beyond the investigative scenes, you'll also have the chance to play some rhythm-based minigames featuring classical music. On that note (heh), the game's soundtrack contains a mix of some of history's greatest classics and new orchestral tracks by Daniele "Elrehon" Coppola and François Sivignon. Finally, you'll have the opportunity to romance some of 18th-century Austria's finest ladies by engaging in delightful conversations and gift giving.

All in all, I'm genuinely intrigued by Blood Opera Crescendo. It's rare to find games that are heavily centered around classical music; combining this with murder mystery themes and a detailed Baroque setting sounds like a perfect...*ahem*...symphony. 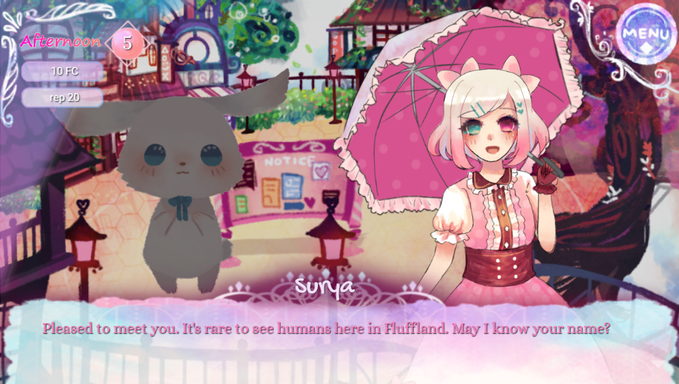 Without warning, you suddenly find yourself in a magical, unchanging world full of soft and delicate creatures known as Fluffs. Little round fluffballs, Fluffs resembling plush animals, and there are even human-shaped Fluffs...oh my! Will you decide to look for a way home or make Fluffland into your new residence?

Fluffland is an adorable mix of visual novel and life sim, with a pastel-infused anime art style and plenty of relaxing diversions. Each in-game day, you'll be presented with a limited number of turns; you'll use your time to meet your fluffy friends, play career-themed minigames, do a bit of gardening, and more. While the main storyline will eventually come to one of several endings, you'll be able to continue playing the life sim elements indefinitely.

One important thing to note is that the public release will be episodic, and you'll need to buy each chapter separately. This might be a turn-off to some, but thankfully, campaign backers pledging €10 (approximately $11 US) or more will receive the full game.

I would definitely recommend taking a look at Fluffland if you're a fan of cute, feminine anime art. If you like what you see, make sure to check out more illustrations and comics by the art team on DeviantArt and Instagram!