Battles are colorful and fast paced.

Despite what it looks like, the game is not a magical girl anime.

"Just exploring around town makes you feel happy, with its great use of pastel colors in everything from the menu screen to the NPCs walking around town. "

RPGs have been few and far between for the Nintendo Wii U, but fans of the system are about to get their fill with the fun and colorful Tokyo Mirage Session #FE. Tokyo Mirage Session #FE is a collaboration between Nintendo and Atlus that mashes together Nintendo's Fire Emblem series with Atlus's Shin Megami Tensei series. It should be noted that the # in the title isn't a hashtag, it's actually the musical notation for a sharp, so the game is pronounced "sharp FE". There is a reason behind this, as the game has a strong focus on singing and musical performances.

This past week, I had the pleasure of visiting the Nintendo Store in New York City to be part of a press event that allowed me to get my hands on the upcoming new title. As a huge Shin Megami Tensei fan and Fire Emblem fan, I was very excited to check this new title out. The impressions I came away with were extremely positive, to say the least. I came in with high expectations and left feeling very satisfied. The game mixes the two titles very well, but at the same time feels very fresh and original. I didn't get to play a lot of the game, but what I did get to play was super fun. 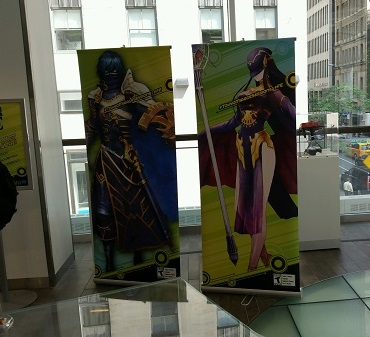 The main plot of Tokyo Mirage Session #FE revolves a talent agency in the middle Tokyo, Japan, where the main character (Itsuki Aoi) and his friends work on controlling a type of energy called Performa. Though performing songs and dances. people can learn to control this power and can attract Mirages from the alternate dimension the Idolosphere. The main cast uses this power to attract friendly Mirages in order to help combat hostile Mirages, as well as other humans that want to use their power for evil. Friendly Mirages are all based off of Fire Emblem characters, specifically Chrom, Virion and Tharja from Fire Emblem Awakening and Caeda, Cain, Draug and Navarre from Fire Emblem: Shadow Dragon and the Blade of Light. When you enter battle, the main character and the rest of the party merge with their Mirages, gaining weapons and spells in order to do battle.

Battles are turn based, take place on a colorful stage, and move incredibly fast. Shin Megami Tensei fans will feel right at home with this battle system — all the spells are based on those from the Shin Megami Tensei games, while all the physical attacks are based on the weapon triangle system from Fire Emblem. Exclamation points appear when an enemy is weak against a particular spell or weapon skill to help you maximize your advantage. Unlike in other Shin Megami Tensei games, however, you do not gain an extra turn if you exploit a weakness. Instead, your companions in battle perform automatic follow-up attacks according to the skills that they have. You can see what skills they will follow up with before you decide to attack, so if they all have skills that can keep exploiting the enemy weakness, you can chain longer strings of attacks, leading to massive damage. But beware; the enemies can also use this chain system when exploiting your weaknesses, which can easily pile up the damage on your characters. You can swap out your companions mid-battle if an enemy you're facing is exploiting their weakness too much or you need a certain skill to exploit their weakness. Chain attacks are also helpful, because they not only do additional damage, but also help fill up a group SP (session points) meter. The SP meter allows you to use special attacks called session skills that do a plethora of things from huge damage to party-wide buffs. Careful use of the system can help change the flow of battle very quickly. In the chapter 3 mid-boss battle against a Pegasus knight that I got to play, I found that exploiting his weakness to lightning was mandatory in order to eliminate the henchmen that kept buffing him and debuffing your party. In the end, I was able to defeat the boss through clever use of items, lightning attacks to start chains to fill my SP meter, and using Tsubasa Oribe's special session skill to grant myself buffs and heal my party. It all flows very well together and leads to fun and engaging battles.

Outside of battles, one of the first thing you notice while playing the game is that the voices are all in Japanese with English subtitles. There will be no English voice acting for the western release. A part of me is kind of disappointed in this, but I can understand this decision on two fronts. First is that voice acting is a time consuming process that would just delay the release of the game, and more importantly, I think it would come across as a bit awkward for this title. The game has a huge (and I mean huge) focus on music. The main cast are all part of a talent agency in modern day Tokyo, and from what I gathered during my trip though the third chapter of the game, you often find yourself having to actually perform. In fact, in this chapter, one of your characters needs to sing a song from a popular anime in order to proceed though the dungeon. It seems that this is an ongoing occurrence in the game, so leaving in the Japanese voices to sing and perform Japanese songs and performances seems like the best move. I know I'll miss the top flight English voice acting that Atlus normally gets for their titles, but I can definitely understand why they went this route for this game. 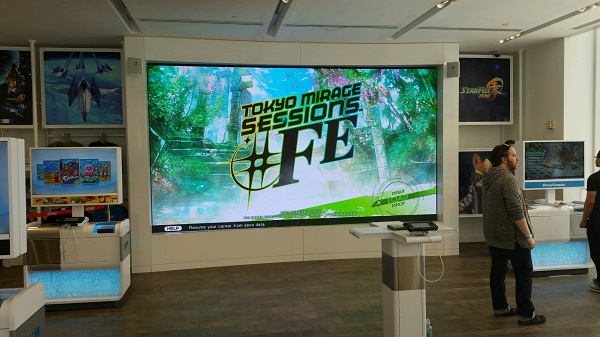 Speaking of dungeons, I got to explore bits and pieces of the first 3, each of which has its own theme. You enter the dungeons, called Idolospheres, from special portals in the city. For instance, the dungeon from chapter 1 is set near a clothing store, so the theme of the dungeon is clothing, with interesting dungeon puzzles revolving around mannequins and clothes. The dungeon for the second chapter focuses around a photo studio, so its theme is based off of that. You have to avoid getting your picture taken by cameras around the dungeon or risk being sent back to the start of the floor. All of these dungeons, like the rest of the game, are super stylized and very colorful, which really sets Tokyo Mirage Session #FE apart from other RPGs. Just exploring around town makes you feel happy, with its great use of pastel colors in everything from the menu screen to the NPCs walking around town.

The Wii U gamepad is used in two distinct ways. First, while exploring dungeons, it allows you to see the mini-map in order to figure out where to go. Secondly, outside of dungeons, it works like an in-game social media app. Characters send messages to you to allow you to do side quests or help progress the story. Nothing too major, but it's nice touches like this that I enjoy seeing from the Wii U gamepad. It doesn't get in the way of gameplay like it can for some games.

I really enjoyed my limited time with this game. I am really looking forward to getting to play it past chapter 3 when it releases on June 24th. If you're a Nintendo Wii U owner and are looking to scratch that RPG itch again, definitely give Tokyo Mirage Session #FE a chance later this month, and be on the lookout for our review as well. 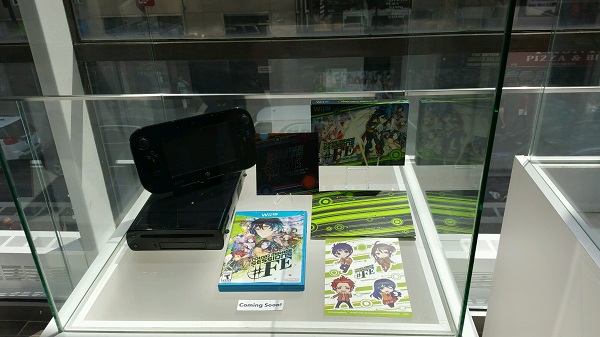