Secret of Mana has been a favorite of mine since an early age. The unique (for the time) battle system, the stunning graphics, and the amazing music were downright magical. I remember first getting my hands on the Western follow-up to Secret of Mana, Secret of Evermore and liking it a lot, but it didn't quite feel right. Evermore had its own charms, but it didn't live up to Secret of Mana. I honestly had no idea the real sequel never came our way. When I got a bit older, and a bootleg version came out, I couldn't bring myself to get into it, probably because I could only play it with a keyboard. Nonetheless, Seiken Densetsu 3 has long sat near the top of my "white whales" list.

My, what a glorious surprise it was, 24 years after the fact, to have an official version dropped in our laps. The best part is Trials of Mana surpasses its predecessor on virtually every front. The late era sprite work shines, especially with some of the giant Benevodons you take on later in the game. Combat, while in some ways a bit outdated now, has been refined in the best ways. No longer am I waiting to charge up an attack — now I get to wail on my opponents at will to charge up powerful attacks. The music is maybe the only place the game falls short of Secret of Mana, but it's still evocative and beautiful. Sure, I have some nitpicks. It's far too easy to get lost. The menus are sluggish and unintuitive. The items for the final class change are a pain to get, and the game barely makes an effort to explain how to get the items or how they affect your stats after the class change. A guide, or a friend who has played the game before (I'm looking at you Sollosi) is almost a must. But the rest? It's amazing.

But really, the thing that I love most about Trials of Mana is the class systems and replayability. There's nothing I enjoy more than figuring out just the right party combination to break a game, and this game presents those options in spades. My party combination of Riesz, Kevin, and Charlotte made quick work of every late game boss, and it was deeply satisfying. Even better, virtually every party combination is viable; Trials of Mana caters to all playstyles. There's such depth and versatility in the skills you can get with the various characters and job changes — along with the many stories and dungeons you can experience depending on your character choices — that I know I'll be coming back to Trials of Mana for years to come. 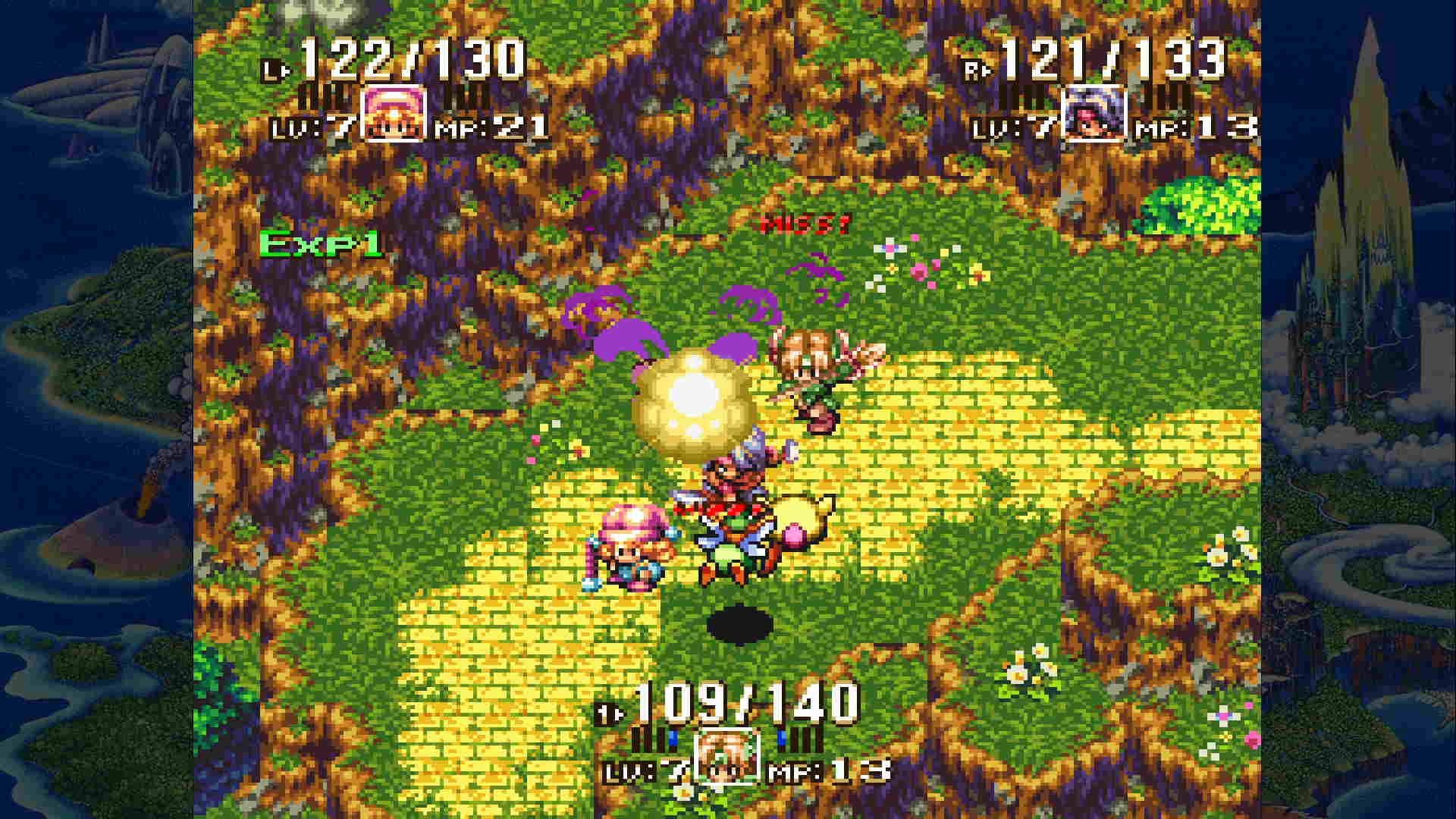 My reaction to the Collection of Mana localization was one of overjoyed confusion. I had written off the possibility for so long that I assumed Seiken Densetsu 3 would remain without an official translation for good. I'm so glad I was wrong. The officially localized Trials of Mana is every bit as good as I remember from the bootleg version I first played more than fifteen years ago.

Trials of Mana speeds up Secret of Mana's combat and progression systems by removing charged attacks and level-by-spellcasting, and adding a class system that governs learning new attacks and spells. The player chooses three characters out of a pool of six for the whole game, and for each character selects one final class out of a pool of four, making subsequent playthroughs of Trials of Mana potentially drastically different each time. The character you choose first also determines several dialog variants, late-game dungeons, and even the game's final boss. Variety is a major feature of the artist formerly known as Seiken Densetsu 3.

But I don't need to write a review here. RPGFan's reviews team and the past month of podcasts communicate the good and bad of Trials of Mana better than I can in this space. The characters, the class changes, the Benevodons, the setting, the music, even the hunt for seeds... I love everything about this game and have counted it among my favorite RPGs for more than a decade, long before I could call it Trials of Mana. Even though they renamed my beloved baby sea turtle Booskaboo something much lamer, this is a good localization of a fantastic game absolutely worth playing. (And don't worry, the puppy injured in chapter 1 turns out all right.) 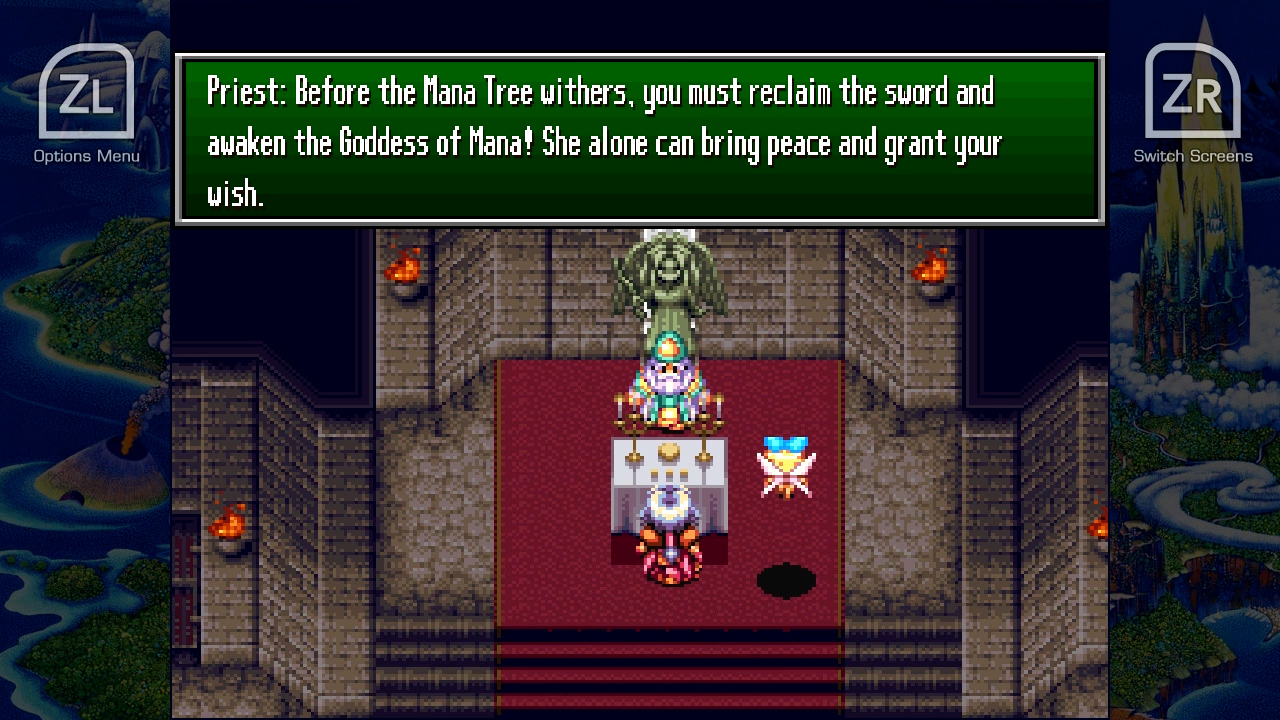 The Mana series has always held a fond sway over my heart, as Secret of Mana is one of the titles responsible for my love of all things RPG. With the beautiful Seiken Densetsu 3 remaining (legally) in Japan, I had to satiate my desires for more Mana with the largely lesser titles that came to North America instead. However, now 24 years later, SE's announcement and release of the title at E3 2019 made my dreams of playing the game (legitimately) possible. It has been a true joy to experience it through Retro Encounter.

The game's class system and various characters immediately caught my attention back in the day, as some of my favourite SNES titles allowed for exploring different jobs, like Ogre Battle: March of the Black Queen or Final Fantasy V. The variety it adds to Trials, as each class adds a different layer to combat, makes it so easy to return to. Beyond the class changes for each character, there are the varied arcs that they take you on as well. The opening moments for each of the heroes is different, giving players a chance to explore the world and each of its major cities, some of which are inaccessible depending on the party you've chosen! Furthermore, the major antagonists vary for each hero from three competing parties. The characters, classes, and their stories do a lot to shake up the game and invite you back in for another playthrough.

Couple the above with vastly improved combat, and the game really sets itself apart from much of Secret's plodding battle mechanics. With a much quicker pace, thanks to the snappier spell and special attack execution, the bulk of the game is just so fun. It's very cool, too, learning that foes can also use some of the same abilities as the party! While the action queue can take its toll, with spells and specials stacking up to wash over the party all at once, it is a welcome addition to streamline battle.

That said, the true charm for me has always been the visuals. With incredibly detailed environments to explore, the team really crafted a true world of fantasy that pushed beyond what was established in Secret of Mana in every way. For myself, having played Legend of Mana prior, it's been a delight to see how much of Trial's world, and the design of everything in it, inspired the later PlayStation entry. This is evidenced even more by the Benevedons, the 8 beasts that you tackle in the latter part of the game that look absolutely incredible on what was a very late SNES title. With so many familiar enemies in the generic mob roster, it is great to see that they pushed the boundaries with these bosses, and the strategies to combat them, invigorating the late-game stretch.

Though it isn't without its faults (dat menu, tho), Trials of Mana has always been one of my favourite games to fawn over. Being able to play it legitimately has firmly solidified its place in my top titles of all time. The visual execution of the world, Hiroki Kikuta's incredible soundtrack, and the brilliant class system all lend themselves to helping Trials of Mana age with grace. 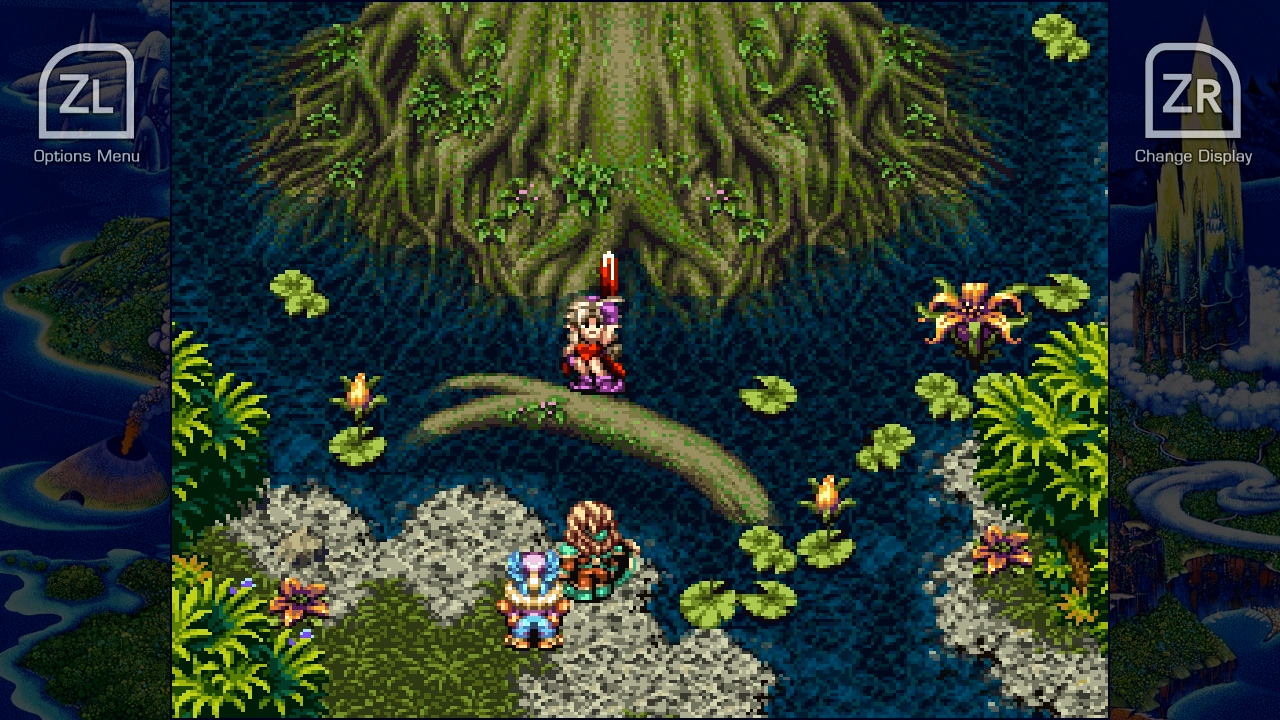 It's hard to put into words just how hard, and how fast, I've fallen in love with Trials of Mana. An audio-visual delight just like its predecessor, after playing the game twice back to back, I think Trials of Mana outdoes Secret of Mana in almost every single way. As a kid I spent hours on the internet poring my eyes over the gorgeous visuals and spritework, but seeing the monsters in motion against the lush backdrops wowed me. The music enraptured me almost instantly, with Hiroki Kikuta's tunes once again ranking among the best SNES soundtracks. The combat was fast and fluid, and posed a decent amount of challenge, meaning I was kept on my toes the entire time. Enemy mobs would sometimes come along and one-shot me, but I was never annoyed at the game, just at myself for not being quick enough. Of course, the SNES and the spell-queueing system is partially to blame, but I soon adjusted just in time for the Benevodon portion of the game, which we affectionately dubbed the Mega Man section. These eight bosses showcase all of my favourite things about this game in eight perfect little packages, and they utilise everything you've learnt up until that point. Plus, I've never seen a more beautiful render of a goat in my life.

I think the true draw of Trials of Mana for me is its very simple class system, which I don't think I praised enough in either of these episodes of Retro Encounter, or my review of Collection of Mana. It encourages replayability to make sure you find your favourite combination of classes, and if you don't like who you've picked, you can start again and make a different choice. I found two almost-perfect parties in Riesz, Kevin, and Hawkeye, and the all-girls team I dubbed the Mana Angels, and I had so much fun with both teams. I'm already planning my next playthrough headed up by Duran, and on top of that I have an all-physical and all-magical party in the works too. I can't believe this is the game that's encouraging me to build spreadsheets to plan out my video game ventures!

Honestly, I could gush about Trials of Mana for hours. Playing it twice in quick succession didn't tire me out. In fact, I wanted to jump straight back into it again. Back when I found out about Seiken Densetsu 3 (as it's called in Japan, and has been known in the West since 1995) for the first time, I wanted nothing more than to play it. I dreamt about it, replayed Secret of Mana in the hope that it would satiate my appetite, but alas, the game never released, and I resigned myself to never officially playing it. Now, in 2019, I'd like to go back and tell that little girl that her dream will come true, and that it's everything and more than she hoped it would be. Trials of Mana lives up to the hype, and has become one of my all-time favourite Super Nintendo games. I'll keep coming back to this one for years to come.